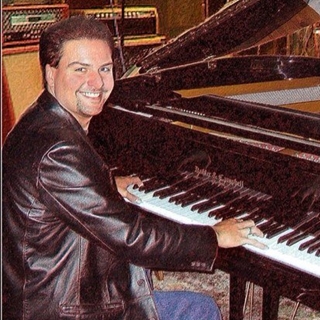 Musician, performer and composer Lee Alverson is a well-known Pittsburgh entertainer, most popularly recognized as “Pittsburgh’s Piano Man” for his solo piano performances, along with his The Phantom of the Opera and Elton John tribute shows. A multi-talented pianist and stage performer, Lee offers a variety of musical styles to fit the bill for your event, including classy instrumentals and easy listening background music to high-energy hits from “the roots of rock n’ roll” (Buddy Holly, Jerry Lee Lewis) to Elton John and Billy Joel.

Lee has shared the stage with Barry Manilow and The Beach Boys, and composed music for various TV and film projects. He has provided scores for video, film, television and commercial projects, including writing the official

theme for The American Bald Eagle Foundation and writing the acclaimed score for The Flight 93 National Memorial 9/11 Anniversary. The song, Innocence Lost, has also been included in a John F. Kennedy Documentary film project.

Currently, Lee is recognized as one of the world’s premier Elton John Tribute Artists. The success of the act has enabled him to take on the roles of other rock legends which include Billy Joel and Jerry Lee Lewis.

Tim and Stacey perform a variety of music covering a wide range of artists such as Fleetwood Mac, The Eagles, James Taylor, The Greatful Dead, [...]
More Info

Abacus Jones is a trio with Joe Materkowski on vocals and guitar, his brother Anthony on bass, and percussionist/drummer/vocalist Jason Cursi. Their musical talent covers [...]
More Info

RML Jazz has performed together as a group since 2004 - mixing Smooth Jazz with Bebop and Classic Jazz, as well as a helping of [...]
More Info

Jane and Mandi have been playing together for over 5 years. From the inception of forming this acoustic duo, Mandi and Jane have come a [...]
More Info

Wayne Shaffer is a solo singer of throwback signature songs from the 1960's onward. These signature songs tell of the relationships, feelings, historical and cultural [...]
More Info

Our annual Open House Festival is a long standing tradition on our farm for over 25 years - Family fun for all ages, live music [...]
More Info
Back in Time
John Parrendo & Jason Kendall

We need to see some ID